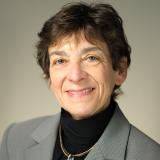 Martha J. Somerman, DDS, PhD, will step down from the directorship of NIDCR at the end of 2019 after an eight-year tenure. NIH Director Francis S. Collins, MD, PhD, issued a statement highlighting her many accomplishments, including her advocacy for research synergy through interdisciplinary collaborations, her commitment to training the next generation of oral health researchers, her efforts to combat health inequities, and her launch of NIDCR 2030, a research agenda that aims to better understand oral health in the context of overall health. She will remain the chief of the Laboratory of Oral Connective Tissue Biology at the National Institute of Arthritis and Musculoskeletal and Skin Diseases to ensure her fellows and staff transition to new positions as they finish their research in the lab.

NIH Principal Deputy Director Lawrence A. Tabak, DDS, PhD, will serve as NIDCR’s acting director during the national search for the Institute’s next director. Assisting in the transition will be Jonathan Horsford, PhD, who will serve as acting deputy director as he continues to lead the Office of Science Policy and Analysis, and Kathleen Stephan, MBA, NIDCR executive officer and director of administrative management. 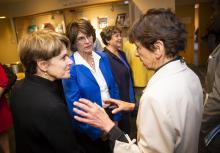 NIDCR has renewed its support for the National Dental Practice-Based Research Network with a third cycle of funding. “By conducting research in the real-world setting of a dental practice, the National Dental PBRN aims to get advances in care to dental patients sooner,” says Dr. Somerman.

How Can Dental Fear be Handled? 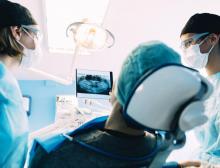 Experts from the US and Canada tackled the challenges surrounding dental anxiety at a recent NIDCR workshop, “Addressing Fear and Anxiety: Steps Toward Accelerating Progress and Building a Cumulative Science.” Some of their proposed solutions—cognitive behavioral therapy and prevention in children—were covered in the NIH Record in October.

Proceedings from the two-day symposium, “Advances in Precision Oral Health Research,” held at NIH and sponsored by the American Association for Dental Research, were published in November in Advances in Dental Research, an e-supplement to the Journal of Dental Research. Topics included precision oral health research, reengineering the oral microbiome for caries management, the molecular basis of dental caries and periodontitis, diagnostic and therapeutic precision in head and neck cancer, and rehabilitation of patients sustaining orofacial injuries. Dr. Somerman spoke about the importance of bringing oral health into the context of overall health.

Funding totaling $945 million has been awarded in fiscal year 2019 across 41 states for research projects supported through the NIH HEAL (Helping to End Addiction Long-term) Initiative. Nearly $24.4 million of NIH HEAL Initiative funds have been directed toward NIDCR-related research projects this year. The Initiative aims to improve treatments for chronic pain, curb the rates of opioid use disorder and overdose, and achieve long-term recovery from opioid addiction by leveraging expertise from almost every NIH institute and center. A portion of these funds will go to projects addressing chronic orofacial pain, pain management following dental extractions, and the use of ultrasound for head and neck cancer pain.

HHS Publishes Guide for Tapering of Long-Term Opioid Use

The recently released HHS Guide for Clinicians on the Appropriate Dosage Reduction or Discontinuation of Long-Term Opioid Analgesics provides advice for clinicians who are contemplating or initiating a reduction or discontinuation of long-term opioid therapy for chronic pain. The guide highlights the risks of rapid tapering, outlines recommended tapering procedures, and addresses management of opioid withdrawal. 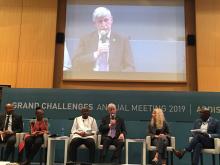 In October, NIH launched a new collaboration with the Bill and Melinda Gates Foundation to invest in development of affordable, gene-based cures for sickle cell disease and HIV. Over the next four years, each partner will invest at least $100 million with the goal of finding affordable cures that could be made globally available, including in low-resource settings where these diseases have a significant impact. NIH Director Francis S. Collins, MD, PhD, shared the news with the African community at the annual Grand Challenges meeting in Ethiopia on October 28.

A recent study conducted by NIH researchers and published in Science Advances demonstrated that black applicants were more likely than white applicants to propose research topics that were funded at a lower rate, such as disparities research and patient-focused interventions. Research topic choice, which had not previously been evaluated, accounted for more than 20% of the funding gap for black scientists applying for R01 grants.

The Health Resources and Services Administration has awarded over $85 million to 298 health centers to expand their oral health service by improving infrastructure. The awards of up to $300,000 will support efforts to modernize existing facilities, install dental and radiology equipment, conduct training and consultation to increase oral health integration, and purchase mobile dental units. In 2018, HRSA-funded health centers served more than 6.4 million dental patients.

Approximately $35 million in new NIH grants have been awarded in fiscal year 2019 for research on Down syndrome through the Investigations of Co-occurring Conditions Across the Lifespan to Understand Down Syndrome (INCLUDE) project. These awards bolster total Down syndrome research funding in FY 2019 to an estimated $77 million. The latest round of INCLUDE funding will support research on chromosome 21’s role in brain development, sleep apnea in children with Down syndrome, immune dysregulation in Down syndrome, and other projects.

NIH Funds New All of Us Research Program Genome Center

The National Center for Advancing Translational Sciences has awarded $7 million to HudsonAlpha Institute for Biotechnology, in Huntsville, Alabama, to evaluate leading-edge DNA sequencing technologies for the All of Us Research Program, NIH’s effort to obtain data on a million or more people in the US. HudsonAlpha will use long-read whole genome sequencing to generate genetic data on about 6,000 samples from participants of different backgrounds. The technique exposes genetic variations that may otherwise go undetected. The data will be in addition to the one million whole genome sequences the program already plans to deliver over the next several years. 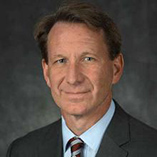 Norman E. “Ned” Sharpless, MD, has returned to the National Cancer Institute to continue as director following a temporary assignment as acting commissioner of the FDA. Sharpless, a leading oncologist who became director of NCI in October 2017, served as FDA acting commissioner from April 5, 2019, to November 1, 2019, while the administration sought a permanent candidate. 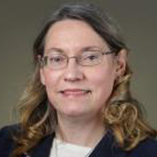 In September, Susan K. Gregurick, PhD, was named NIH’s associate director for data science. She will direct the NIH Office of Data Science Strategy and help lead NIH’s efforts with other organizations engaged in scientific data generation, management, and analysis. Since 2013, Gregurick has been director of the Division of Biophysics, Biomedical Technology, and Computational Biosciences in the National Institute of General Medical Sciences, and she brings experience in computational biology, high performance computing, and bioinformatics to the new position. 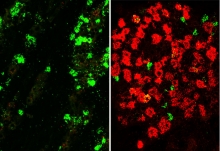 A research team from NIDCR and the Eunice Kennedy Shriver National Institute of Child Health and Human Development have found that trigeminal neuralgia, a chronic pain condition, may not develop as previously thought. The scientists discovered that the gene expression patterns following neuralgia-inducing damage to mouse trigeminal nerves may not be direct triggers of chronic pain but could instead play a role in wound healing.

How Does a Mouse’s Tooth Grow? 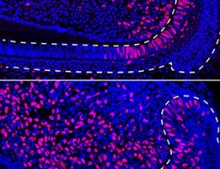 Ophir Klein, MD, PhD, a professor at the University of California, San Francisco, and a 2015 recipient of the NIDCR Award for Sustaining Outstanding Achievement in Research, has shown that stem cells from the constantly re-growing incisors of mice are more abundant, active, and dynamic than previously thought. The study, published in Nature Cell Biology, could help scientists understand how tooth regeneration happens in mice and whether that knowledge translates to humans. 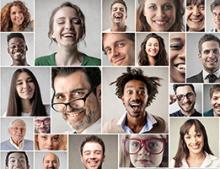 An international study, which included data from NIDCR-supported clinical research, shows that there are 47 areas of the human genome associated with dental caries. The study results, drawn from oral health and genetic data from more than 500,000 people, are published in Nature Communications. The findings also suggest that the genetic processes that contribute to dental caries may affect cardiovascular and metabolic health as well.

Author/Citation
University of California, Riverside
Date
October 22, 2019
Back to top