An NIDCR-supported scientist’s long-term research focus on a rare genetic condition has led to discoveries that apply to more common diseases.

Yasuyoshi Ueki, MD, PhD, an associate professor at the University of Missouri–Kansas City School of Dentistry, studies the functions of SH3BP2 (SH3-domain binding protein 2) gene. In 2001, he revealed that mutations in the SH3BP2 gene were the cause of cherubism, a rare inflammatory bone condition of the jaw. Since that time, he and his research team have been investigating the mechanisms that are involved in the inflammation and bone loss associated with cherubism.

His team’s recent exploration and identification of certain molecular pathways involved in bone loss suggest that SH3BP2 might be a potential therapeutic target for other inflammatory diseases, such as rheumatoid arthritis, periodontitis, and lupus. Whereas cherubism is very rare and is limited to facial bones, rheumatoid arthritis and other inflammatory diseases impact millions of people and harm tissues throughout the body. All of these inflammatory conditions are associated with an elevated level of tumor necrosis factor alpha (TNF-alpha) in tissues. 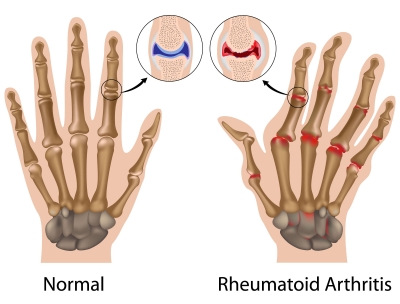 Because the cherubism mutation in SH3BP2 results in increased bone loss and bone destruction, the researchers hypothesized that inhibiting SH3BP2 could prevent TNF-alpha-related inflammatory bone loss, such as the loss that occurs in rheumatoid arthritis. In articles recently published in PLOS One,the Journal of Bone and Mineral Research, and Arthritis & Rheumatology, Ueki demonstrated that suppressing SH3BP2 function could reduce TNF-alpha-related inflammation and bone loss in inflammatory bone-destructive diseases.

Ueki said that SH3BP2 may be a molecular target for developing novel therapies for rheumatoid arthritis, which is a type of autoimmune disease. “Autoimmune arthritis is a consequence of complex immune reactions that involve a variety of immune cells,” he explained. His team of researchers hopes to reveal the cell type that contributes to the suppression of disease and to identify the molecule that helps control the SH3BP2 pathway and function. If that work progresses as expected, the ultimate goal is to achieve cell-specific suppression of SH3BP2 to prevent or treat arthritis.