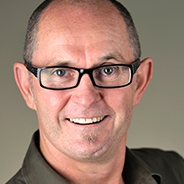 Matthew P. Hoffman, BDS, PhD, who is a senior investigator and chief of the Matrix and Morphogenesis Section in the Laboratory of Cell and Developmental Biology (LCDB) in NIDCR’s Division of Intramural Research, has been appointed the Division’s deputy scientific director.

In 1994, Hoffman came to NIDCR as a postdoctoral fellow to work with Hynda K. Kleinman, PhD, and he became Staff Scientist in 2000, Tenure-Track Investigator in 2004, and Senior Investigator in 2011. In 2015, he was appointed Deputy Branch Chief, working with Kenneth M. Yamada, MD, PhD, in the LCDB. His lab identifies growth factor signaling pathways that drive salivary organogenesis and regeneration.

In 2013, Hoffman was elected a AAAS Fellow. His other honors and awards include the 2015 Distinguished Scientist Award for Salivary Research and the 2009 Salivary Researcher of the Year Award, both from the International Association for Dental Research.

A native of New Zealand, Hoffman earned a BDS from the University of Otago in Dunedin in 1986. He worked for two years in a hospital dental clinic in Wellington, and later conducted research on oral plaque and complex microbial communities at the New Zealand Medical Research Council. After being awarded a 1989-1993 Fulbright Travel Scholarship to study Candida albicans glycoproteins and adhesion in the laboratory of Constantine G. Haidaris, PhD, at the University of Rochester, Hoffman received a PhD in microbiology and immunology in 1994.

James E. Melvin, DDS, PhD, who has been the acting deputy scientific director since April 2015, will now devote more energy to the NIDCR Dental Clinical Research Fellowship Program, which he revitalized several years ago during his tenure as clinical director from 2010 to 2015. An internationally renowned investigator, Melvin has made landmark contributions to the field of salivary gland physiology. As a senior investigator in the Division’s Secretory Mechanisms and Dysfunction Section, his lab focuses on elucidating the ion transport mechanisms of salivary glands.