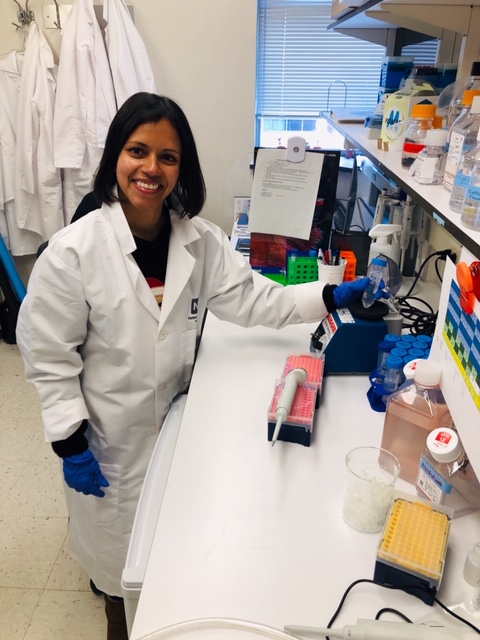 Surangi Perera, PhD, says the most useful lesson she learned in her doctoral studies was “to embrace uncertainty.” Practicing this mindset as a scientist is important because experimental work is unpredictable, she says. “You really do not know what will happen unless you try.”

Perera brought her affinity for the unknown and a passion for mentoring to NIDCR in August, when she became the institute’s first Sang-A Park Memorial Intramural Postdoctoral Fellow. She’s now working in the lab of NIDCR’s Laura Kerosuo, PhD, who shares Perera’s philosophy. Kerosuo’s lab studies the neural crest, a transient population of stem cells in embryonic vertebrates that eventually give rise to the peripheral nervous system, parts of the heart and some arteries, and craniofacial bones, cartilage, and connective tissue. In her position as a Park postdoc, Perera studies the molecular mechanisms that control how neural crest cells decide among the various fates available to them.

The Park fellowship honors the memory of NIDCR postdoc Sang-A Park, PhD, and her passion for science and mentorship. Its aim is to prepare young researchers from diverse backgrounds for the rigors of dental, oral, and craniofacial science. Because Park enthusiastically taught interns and her colleagues, the fellowship also has a significant mentoring requirement. “Mentoring is a learnable skill, and we hope that there will be a strengthening of trainees’ mentoring skills over time,” says Deborah Philp, PhD, director of NIDCR’s Office of Education. Perera’s basic science focus was strong, and she stood out for her “mentoring experience from her undergraduate years onward,” Philp says.

In the summer of 2008, Perera left her home in Sri Lanka to begin her undergraduate studies in the United States at the University of West Georgia, where she majored in biology and minored in psychology. In addition to her coursework, she tutored undergraduates in basic biology and worked on several lab projects, including research on the mouse olfactory system, genomics of single-celled green algae, and the effects of soot on zebrafish development.

“I wanted to get as much experience as I could in a research setting, so I took any opportunity to work in a lab environment,” says Perera. “I was curious to see how scientific discoveries were made.”

After college, Perera worked for two years in a lab at the University of Wisconsin-Milwaukee studying the effects of nicotine on the development of the neural crest. It was there that Perera decided to become a developmental biologist and address the question that most piques her interest: how does a multicellular organism develop from a single cell?

Perera carried out her dissertation work at the University of Cambridge under the mentorship of Clare Baker, PhD, whose lab studies embryonic cell populations that give rise to the vertebrate peripheral nervous system. Perera focused on the development of olfactory ensheathing cells, which derive from the neural crest. These cells wrap around and protect nerve fibers that detect and transmit information about smell to the brain, and they promote olfactory nerve regeneration throughout life. Because of their role in nerve repair, olfactory ensheathing cells have shown promise for treating spinal cord injuries. A better understanding of these cells could inform such efforts.

Beyond her research at Cambridge, Perera found gratification in teaching and mentoring. She supervised undergraduates in the lab doing research projects and served as a teaching assistant for lab courses in histology and developmental biology.

At NIDCR, Perera will continue to pursue her fundamental fascination: How does the neural crest give rise to so many diverse cells? One such offshoot is the cranial nerve ganglia, clusters of nerve cells that convey sensory information between the brain and parts of the head, face, and mouth. Perera is looking at how parts of the cranial nerve ganglia, neurons and neural support cells called glia, develop from neural crest cells under the guidance of gene networks. This work could ultimately aid efforts to find treatments for developmental disorders that are caused by abnormalities of the neural crest.

In the lab, Perera looks forward to mentoring trainees, just as she did at Cambridge. “Sharing your experiences or knowledge is very rewarding,” she says. “It is exciting to see someone else learn and understand a new concept.”