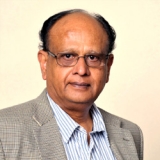 Dr. Ashok Kulkarni’s research focuses on characterizing the molecular role of Cdk5 in orofacial pain. His laboratory has shown that the activity of Cdk5 is upregulated due to inflammation that, in turn, modulates peripheral pain signaling. Current research efforts are centered on delineating how Cdk5 and its two activators, p35 and p39, affect pain signaling specifically in the orofacial region. Orofacial pain differs from peripheral pain because the dense innervation of facial structures leads to increased sensitivity to pain, which makes orofacial pain difficult to diagnose and treat. His group uses an array of approaches to investigate the molecular mechanisms involved in how Cdk5 activity modulates orofacial pain signaling. Their research approaches include using genetically engineered mouse models for behavioral, genomic and proteomic analyses. Their current studies will contribute to a greater understanding of the molecular roles of Cdk5 in pain signaling, and also help future efforts to effectively treat pain.

Dr. Kulkarni received his PhD from M.S. University in Baroda, India. He served as a postdoctoral fellow at Columbia University, NY, from 1982 -1987, and then as a senior staff fellow in NINDS at NIH from 1987-1995. In 1995, he joined NIDCR as a tenure track investigator to head the Functional Genomics Unit and the Gene Transfer Facility, and in 2000 he was tenured as a senior investigator and appointed chief of the Functional Genomics Section in the NIDCR. His laboratory studies the molecular mechanisms involved in cancer and pain affecting the oral and craniofacial areas. He continues to serve as manager of the Gene Transfer Facility, which provides research and technical services to generate and preserve genetically engineered mouse models for the investigators in the Division of Intramural Research of NIDCR. He is a member of the American Association of Dental Research, the International Association of Dental Research, the Society for Neuroscience, and the International Association for the Study of Pain. He currently serves as a reviewer for numerous scientific journals, and as an editorial board member for The Journal of Dental Research and Neurochemical Research.