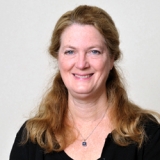 The goal of Dr. Marian Young’s section is to explore the function of extracellular matrix (ECM) proteins found in skeletal tissues. The current focus is on the small leucine-rich proteoglycans (SLRPs) biglycan (bgn), decorin (dcn), and fibromodulin (fmod), and the Wnt target gene known as WISP1. Dr. Young’s research explores how these ECM components control skeletal tissue function via both anabolic (through differentiation and formation) and catabolic (breakdown or resorption) mechanisms which, in some cases, work by modulating growth factor availability. The group also investigates how stem cell fate can be regulated by the ECM in multiple skeletal sites including bones, teeth, cartilage and tendon. The ultimate purpose of the research is to develop practical applications for these ECM components in ameliorating diseases such as osteopenia (low bone mass), osteoarthritis (loss of cartilage) and ectopic bone formation in soft tissues.

Dr. Young received a PhD in Developmental Biology from the University of Connecticut. After a postdoctoral fellowship at the NIDCR, Dr. Young headed a group in the Mineralized Tissue Research Branch where she began her investigations on the molecular biology and function of extracellular matrix (ECM) proteins in skeletal tissues. Dr. Young has organized several symposia and scientific conferences on the topic of bones and teeth, mineralization, and the ECM including the Gordon Research Conference (GRC) on Bones and Teeth (1997), a symposium on the ECM in the Craniofacial Complex, AADR (2004) and the GRC on Proteoglycans (2010). Dr. Young has served on numerous committees at the NIH related to promotion and tenure action, oversight of animal facilities, and coordination of summer student research. She has supervised dozens of research fellows and students. In 2014, Dr. Young received a Ruth L. Kirschstein Mentoring award. In August 2018, Dr. Young was appointed deputy scientific director of NIDCR's Division of Intramural Research.