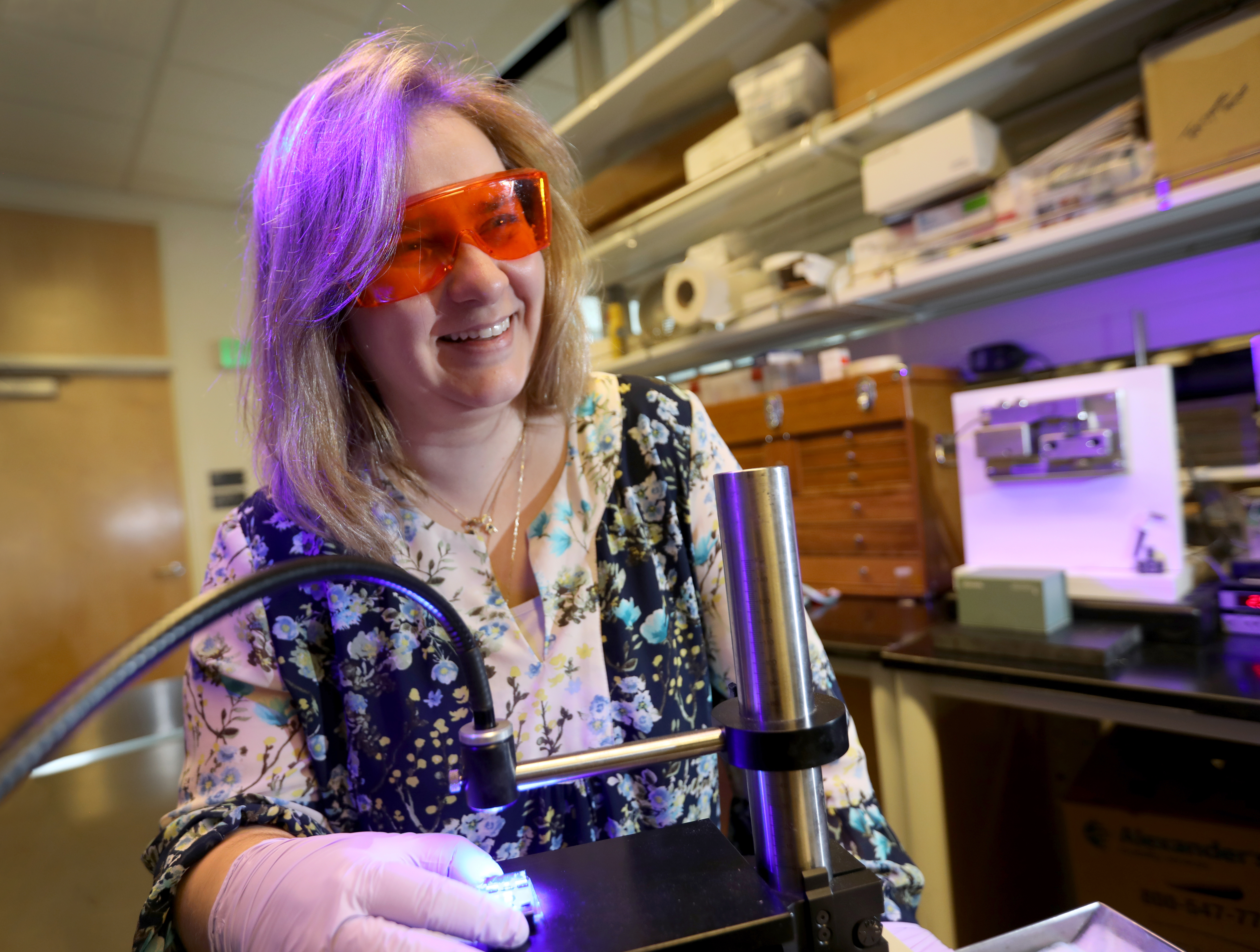 What does it take to make tougher dental fillings that can withstand decades of chewing, the ever-changing chemistry of the mouth, and billions of resident bacteria, some of which cause cavities? The answer: a whole lot of inventiveness.

Such creativity is supported by NIDCR, which has called for researchers to develop fillings that are better suited for the rigors of the oral cavity. Carmem Pfeifer, DDS, PhD, an associate professor of biomaterials and biomechanics in the Oregon Health & Science University (OHSU) School of Dentistry, has risen to that challenge.

With support from a 2013-2018 NIDCR initiative, Pfeifer’s lab developed a filling that is twice as strong and is longer lasting than those currently used in dental clinics. The work led to Pfeifer’s receipt in fall 2019 of NIDCR’s Sustaining Outstanding Achievement in Research (SOAR) award, which provides support for exceptional mid-career scientists to pursue potentially transformative research programs. Pfeifer’s SOAR work will build on her earlier research by exploring how oral microbes affect filling materials.

Most of the fillings used today are dental composites. They are white and look tooth-like, but they last only seven to 10 years, says Pfeifer. Over time, the composites can crack, break, or simply fall out, but they most often need replacing when new cavities develop around the edges of a dental filling. Failure of dental fillings can lead to more extensive damage to the tooth, requiring repeated visits to the dentist and increased expenses for patients.

Scientists have tinkered with the materials used in dental composite fillings to improve their durability since they were first invented in the 1960s. Much of the work focused on the filler within the composite, the putty-like material that is packed and hardened into the cavity, and the adhesive, which glues the composite filling to the tooth. Despite these efforts, composite and adhesive materials are still largely made up of a class of chemicals called methacrylates that are widely used in electronics, medicine, and industry to make tougher, more stable, scratch-resistant materials. However, water and bacterial enzymes can break the chemical bonds of the methacrylates used in today’s dental composite fillings.

When Pfeifer and her colleagues began their project, they wanted to create composites that could better withstand these onslaughts. Their next-generation fillings had to be durable and had to adhere tightly to teeth, allowing no gaps for cavity-causing bacteria to slip in. They also needed to be simple enough for dentists to use.

“We did not want to make something so different that no dentist could use it,” said Pfeifer. “For this to be any benefit to the patient, the dentist must be able to use it in a reliable way.” 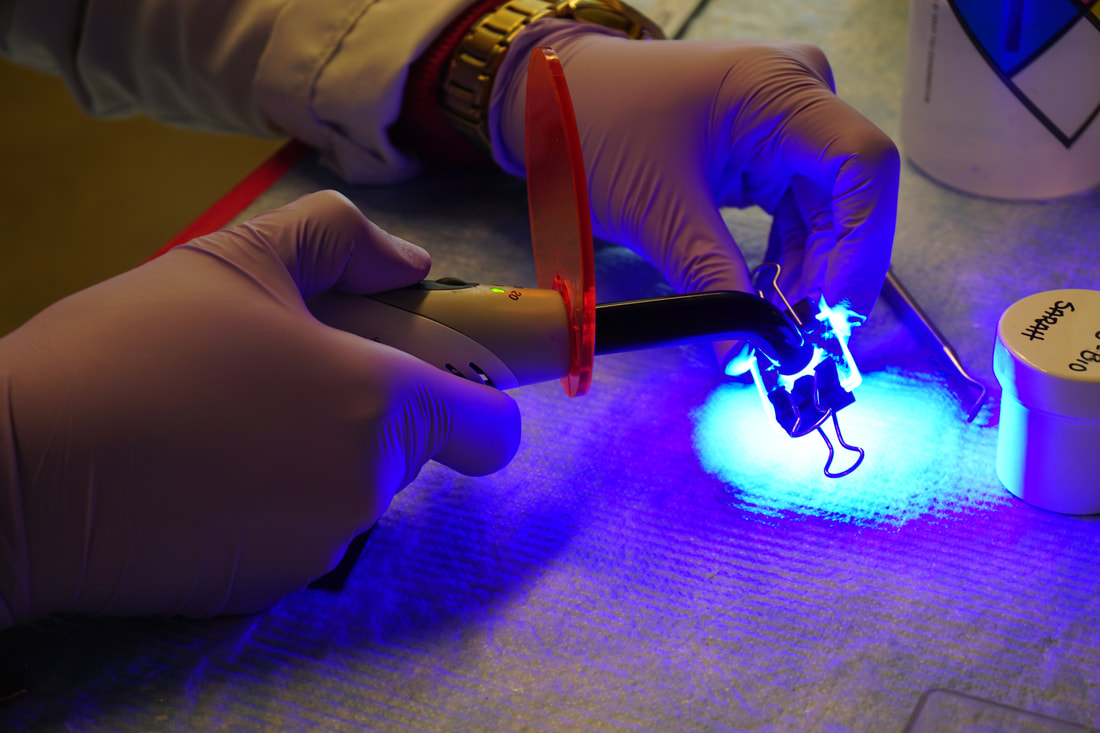 After trying many combinations of chemicals—Pfeifer says she’s lost count of the number of attempts they made—her lab found two chemicals that worked well together in the composite. The scientists created an adhesive with a novel molecule called methacrylamide that forms a different—and stronger—chemical bond than those formed by methacrylates. The researchers then developed a filler coated with thiourethane, a chemical tough enough to protect car bumpers.

Pfeifer tested the composite formulations on extracted human teeth in a bioreactor, an environment that simulates the mouth. Developed by Pfeifer’s OHSU colleague and mentor, Jack Ferracane, PhD, the bioreactor recreates the chemistry and temperature of the oral cavity while applying pressure akin to chewing on the fillings.

The researchers found that thiourethane makes the composite twice as resistant to breaking than standard fillings. It also reduces stress by half in the place where tooth and filling meet—extreme stress at this juncture can cause filling failure.

Pfeifer and her colleagues also showed that methacrylamide’s bond strength—how well it sticks to a tooth—appears to increase over time, which was unexpected. The methacyrlamide and thiourethane composite also passes the “could a dentist use it” test: the material can be applied using equipment and techniques already widely used in dental clinics.

The work on methacrylamide and thiourethane has yielded two US patents. There has been some interest from industry in developing the composite for clinical use, says Pfeifer, although a product ready for dental clinics might still be many years away.

For her SOAR research, Pfeifer will spend the next several years focusing on how microbes act on the dental materials she has created. She wants the composites to reliably inhibit Streptococcus mutans and other cavity-causing bacteria without harming the thousands of helpful species that reside in the mouth. Achieving these goals could require further chemical adjustments to composite materials.

For now, the plan is to study communities of S. mutans in the bioreactor and then test complex combinations of microbes, including samples from the mouths of volunteers, says Pfeifer, who is positively enthusiastic about the challenge ahead.

Reprint this article in your own publication or post it your website. NIDCR News articles are not copyrighted. Please acknowledge NIH’s National Institute of Dental and Craniofacial Research as the source.