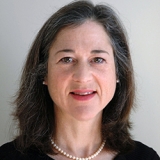 Dr. Lynn Mertens King is the director of NIDCR’s Division of Extramural Activities, where she oversees the Scientific Review Branch, the Grants Management Branch, and the Research Training and Career Development Branch. She also serves as the executive secretary of the National Advisory Dental and Craniofacial Research Council for the extramural program, and as the executive secretary for the Board of Scientific Counselors for the intramural program.

Before becoming division director, Dr. King was chief of the Research Training and Career Development Branch within DEA, where she served as the principal advisor to the NIDCR Director on the administrative and fiscal management of the extramural research training portfolio. Prior to that role, Dr. King was chief of DEA’s Scientific Review Branch, a role she held after serving for five years as a scientific review officer. While with DEA, she developed an NIDCR dental specialty and PhD program funding opportunity announcement (FOA) to support career development of dentist-scientists, along with a new mentoring network program to enhance research career advancement of underrepresented postdoctoral and early-career faculty investigators.

A former assistant professor at the University of Miami, Coral Gables, Dr. King earned her Ph.D. in population biology from Washington University in St. Louis. She completed a postdoctoral fellowship at Harvard University in population genetics and molecular evolution. She has won numerous awards for her contributions to NIDCR and led efforts to enhance the research careers of dentist scientists and promoted diversity in dental, oral, and craniofacial research.