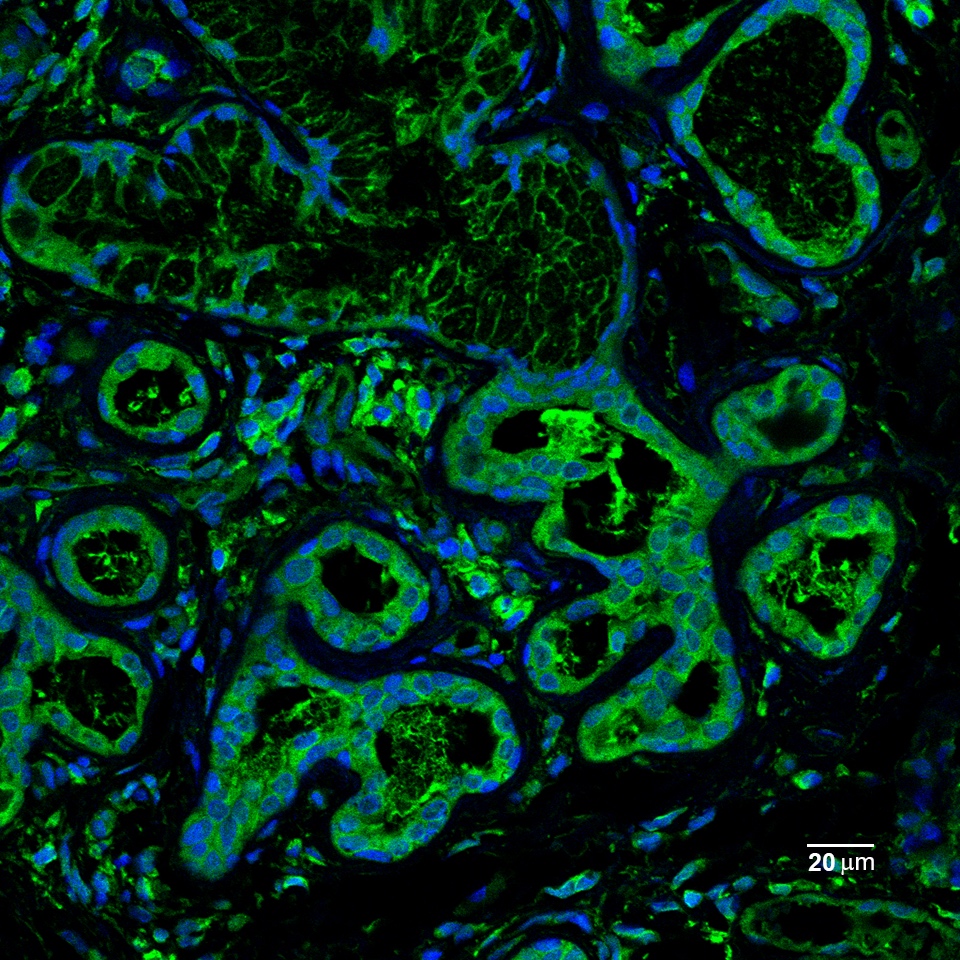 Sjögren’s syndrome is an autoimmune disorder in which immune cells mistakenly attack and damage cells in the glands that produce tears and saliva. As a result, the glands become inflamed and produce less fluid, leading to symptoms of dryness in the eyes and mouth. For people with the condition, dry mouth affects taste, makes chewing and swallowing more difficult, and increases the risk for cavities, tooth loss, and oral infections. Sjögren’s syndrome affects 2 million to 4 million people in the United States, most of them women.

NIDCR scientists report in a recent study that they could restore salivary gland function and reduce inflammation in animal models of Sjögren’s syndrome by interfering with the activity of a protein called bone morphogenetic protein 6 (BMP6). The findings point to BMP6 as one possible driver of salivary gland dysfunction in Sjögren’s syndrome and suggest it might be explored as a therapeutic target in patients.

In the new study, John Chiorini, PhD, and first author Hongen Yin, MD, PhD, and their colleagues evaluated salivary gland tissue from 79 female patients with Sjögren’s syndrome and found that more than half of them had elevated levels of BMP6 protein in their salivary glands. BMP6 is a signaling molecule that triggers production of proteins involved in a wide range of processes, including bone growth, iron regulation, ovulation, and immunity. In patients with elevated salivary gland BMP6, higher levels of the protein were correlated with lower rates of saliva flow and, marginally, increased inflammation. These findings—along with earlier reports that overproduction of BMP6 in mice led to Sjögren’s-like symptoms—suggested that BMP6 is associated with Sjögren’s syndrome development, says Yin.

To explore the role of BMP6 signaling, the researchers examined its effects in human salivary gland cells grown in a dish and in mouse models of Sjögren’s syndrome. The scientists first treated the human salivary gland cells with BMP6, which diminished the ability of water to flow across the cell membranes. This reduced flow hampers saliva production in Sjögren’s syndrome. Adding chemical inhibitors of BMP6 restored the water flow.

In two Sjögren’s mouse models with elevated BMP6, treatment with BMP6 inhibitors led to improved salivary gland function and, in one of the models, reduced inflammation-related cells and signaling molecules. The treatment also increased levels of AQP5, the main water channel that governs water flow across salivary gland cell membranes. The results point to a central role of AQP5 in restored salivary gland function after inhibitor treatment. Taken together, the scientists say, BMP6 signaling appears to be linked to inflammation and loss of salivary function typical of Sjögren’s, and blocking it in cells and animals reversed these effects.

The findings suggest that compounds that interfere with BMP6 signaling merit further exploration for their therapeutic potential in human Sjögren’s patients with elevated BMP6. Because Sjögren’s syndrome could have more than one cause and the disease manifests differently among people, “therapies will have to be based on personalized medicine and understanding of the individual’s disease,” says Chiorini.

Reprint this article in your own publication or post to your website NIDCR News articles are not copyrighted. Please acknowledge NIH’s National Institute of Dental and Craniofacial Research as the source.