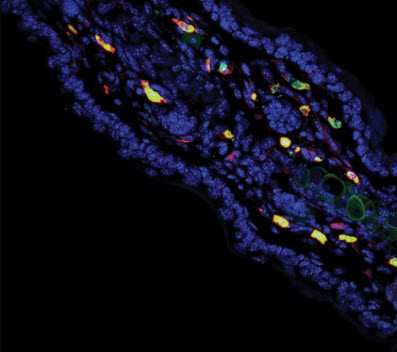 When you feel the itch of a bug bite or the pain of a toothache, it’s due to neurons (nerve cells) at the body’s surface that receive and forward sensory signals to the brain. But the cells and molecules that make up sensory pathways aren’t well understood. NIDCR-supported efforts to map specific features of these circuits could lead to better treatments for itch- and pain-related conditions.

In a recent Cell Reports paper, NIDCR intramural scientist Mark Hoon, PhD, and colleagues provide new insights into an itch pathway they first found in 2013. Their early research identified the neurons and molecules that form the itch route but did not reveal details of how the circuit’s sensory neurons—called natriuretic polypeptide b (Nppb)-expressing neurons—are turned on.

In the current study, the researchers show how Nppb neurons can be activated by immune defenders called mast cells. When encountering foreign agents at the body’s surface, mast cells release a variety of protective substances. Hoon and colleagues found that Nppb neurons have receptors that specifically sense three of the chemicals released by mast cells.

Exposing mouse skin to these chemicals—leukotriene C4, serotonin, or sphingosine-1-phosphate—caused the animals to scratch vigorously at the affected area. In contrast, mice with deactivated Nppb neurons did not scratch in response to the mast cell chemicals. Using an imaging technique to visualize cultured neurons, the researchers found that only Nppb neurons, and not other sensory neurons, were activated by the three mast cell chemicals.