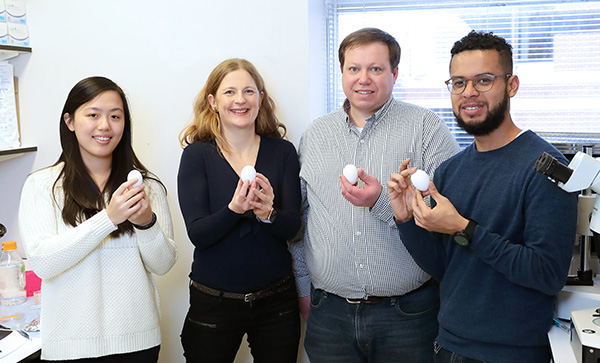 A googly-eyed chicken head suitable for a Mardi Gras parade stares down from a shelf in Laura Kerosuo’s office. The mask is a reminder of the animal model that has helped her better understand the neural crest, a transient population of stem cells critical to the development of all vertebrates—from frogs to chickens to humans.

Neural crest stem cells, which appear early in developing embryos, are generally thought to be multipotent, meaning they can give rise to many kinds of cells, including some found in facial cartilage and bone, teeth, and salivary glands, and in the heart, nerves, and skin. However, Kerosuo’s work has shown that a fleeting portion of the neural crest in chick embryos may include even more versatile cells. These are pluripotent, capable of generating nearly all the different cells in an organism. Her efforts to understand normal neural crest behavior could help scientists better understand the abnormalities in neural crest development that lead to craniofacial birth defects such as cleft palate, as well as neuroblastoma, a type of cancer that forms in nerve tissue and is found mostly in young children.

Kerosuo joined NIDCR in July 2018 as an Earl Stadtman Investigator. Stadtman scientists are recruited to tenure-track positions at NIH to conduct creative, high-impact research. She is studying the molecular mechanisms that govern the stem cell characteristics of neural crest cells, work she started as a postdoc at the California Institute of Technology.

The discovery of pockets of pluripotent neural crest cells was made possible with a 3D mapping technique called spatial genomic analysis. To develop the method, Kerosuo worked closely with Caltech colleagues who had the biophysics expertise needed for the project. The technique allows researchers to take a detailed look at which genes are turned on, or expressed, in spatially distinct cell populations. The scientists used the platform to measure the expression of 35 genes simultaneously in chick embryos to see what happens before neural crest cells start to commit to different cell fates and migrate to various locations accordingly. The analyses led to the discovery of distinct neural crest cell subpopulations. One of them is a pluripotent stem-cell niche.

"The neural crest is a bit of an oddball," says Kerosuo. Contrary to what biologists might expect, the neural crest keeps its stem-cell properties through gastrulation, an early developmental period when embryos shift from being a single population with equal stem cell potential to having three layers. As cells migrate into these layers, they commit themselves to their future roles, thereby narrowing their options. However, some neural crest cells stay—albeit briefly—uncommitted to a particular cellular destiny defined by the layer they are in. 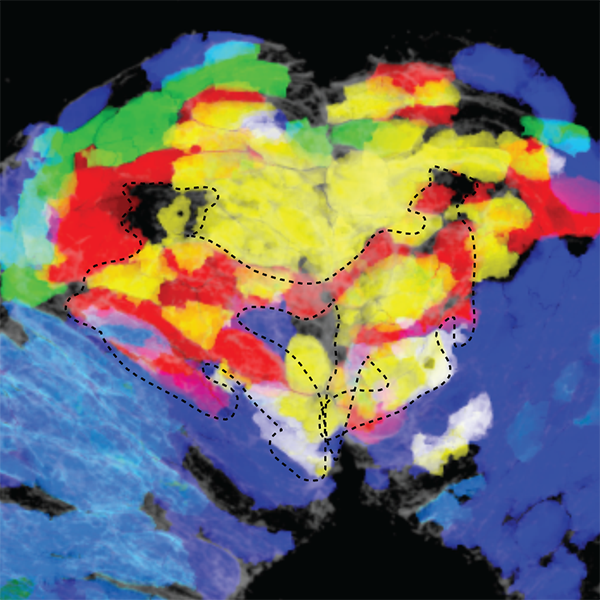 Kerosuo wants to know whether neural crest cells are somehow protected during this developmental phase and thus are able to hold onto their stem-cell characteristics. Or, are the stem-cell traits reprogrammed back into the neural crest cells? Getting answers to these questions will provide fundamental knowledge on not just the development of the neural crest, but also the principles of how stem cells are created. "So far, we have tended to think that reprogramming is not an option nature would choose during normal development, although it might actually be a relevant and more cost-effective strategy than protection of cells from environmental cues," Kerosuo says.

Because a core set of genes for the neural crest is conserved across species, Kerosuo will continue working with chicken and mouse models to find developmental commonalities. For her, the chicken remains a perfect model because its neural crest does its work in the first 24 hours of its 21-day development cycle. (For humans, the neural crest is active at week 3.) Also, even though mice are mammals like humans, the chicken embryo and human embryo are more alike in the earliest stages of development, says Kerosuo. An important next step will be to determine whether the chicken results can be replicated with human cells.

Kerosuo wants to apply what is known about normal neural crest cells to better understand disorders that arise when these cells go awry. She looks forward to collaborating with NCI’s Carol Thiele, PhD, who studies neuroblastoma tumor development. One possible project with Thiele involves using spatial genomic analysis on frozen neuroblastoma tumor samples to find ways to more easily identify tumors that are likely to be aggressive.

When asked what direction she hopes her research will take, Kerosuo paused. "When you start something new, you don’t know where it will take you, which is the fun part of this profession and provides the fuel to keep going," she says. "You have to be ready for any kind of result," even if that sometimes means throwing out years of work.

"We put in so much effort for small advances," she says. All a scientist can do is be persistent.