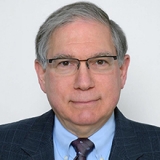 Performing the Duties of the NIH Director
Senior Investigator

Dr. Lawrence Tabak's laboratory studies the functions and biosynthesis of O-glycans. Mucin-glycoproteins are heavily decorated with carbohydrate side-chains, termed O-glycans, which are often clustered within repeating amino acids sequences of the protein (tandem repeats). Functionally, membrane-bound mucins are involved in signal transduction events, whereas secreted mucins contribute to the formation of extracellular matrix or to the gel-like mucus coat which envelopes mucosal surfaces of the body thereby forming the most exterior face of the innate immune system. Although it is known that O-glycans are ubiquitous among proteins, the precise nature of the “O-glycome” remains to be defined. We have approached this by both top-down and bottom-up proteomic studies as well as investigations of the substrate specificities of the multi-gene family of enzymes that are responsible for the formation of O-glycans, the UDP-GalNAc:polypeptide N-Acetylgalactosaminyltransferases (GalNAcTs).

Dr. Lawrence A. Tabak, D.D.S., Ph.D., is performing the duties of the NIH Director. He assumed this role on December 20, 2021. Prior to that, he served as principal deputy director of NIH beginning on August 23, 2010. In addition, Dr. Tabak served as NIDCR acting director from January 1, 2020 to October 13, 2020 and as the acting principal deputy director of NIH from November 2008 through August 2009. Named as the director of NIDCR in September 2000, he held that post through August 2010. Prior to joining NIH, Dr. Tabak served as the senior associate dean for research and professor of dentistry and biochemistry & biophysics in the School of Medicine and Dentistry at the University of Rochester in New York. A former NIH MERIT recipient, Dr. Tabak has received several honors and awards for his work including election to membership in the Institute of Medicine of the National Academies. He has also received teaching awards for his work with both graduate and medical students.