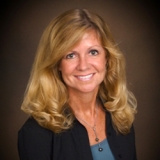 Cells of the body are decorated with a variety of carbohydrates (sugars) that serve diverse functions. Alterations in the presence of these sugars are associated with a number of human diseases, including familial tumoral calcinosis and various cancers. To better understand how alterations in glycosylation contribute to disease onset and progression, Dr. Ten Hagen’s group studies how sugar addition (O-glycosylation) is regulated and how it influences basic biological processes. Using Drosophila models, the group has demonstrated that O-glycosylation is an essential modification that is required in specific cells and tissues during development. Current research is directed at further defining the role this protein modification plays in secretion, secretory vesicle formation, cell adhesion, and cell signaling in both Drosophila and mammals. Ultimately, the aim is to elucidate how O-glycosylation regulates key cellular processes during development and disease.

Dr. Kelly Ten Hagen received a BS from Cornell University and earned a PhD at Stanford University. She served as a research assistant professor at the University of Rochester from 1992-2001, and then as a senior research fellow at the National Institute of Diabetes and Digestive and Kidney Diseases (NIDDK), from 2001-2004. She was appointed chief of the Developmental Glycobiology Unit at NIDCR in 2004 and was promoted to senior investigator and chief in 2012. Dr. Ten Hagen has served as an editorial board member for The Journal of Biological Chemistry and on the Board of Directors for the Society for Glycobiology. She currently serves on the Promotion and Tenure Committee for NIDCR, the Woman Scientist Advisors Executive Committee for the NIH, the steering committees for the NIH Glycobiology and Developmental Biology Scientific Interest Groups, and as an editorial board member for the journal Glycobiology.